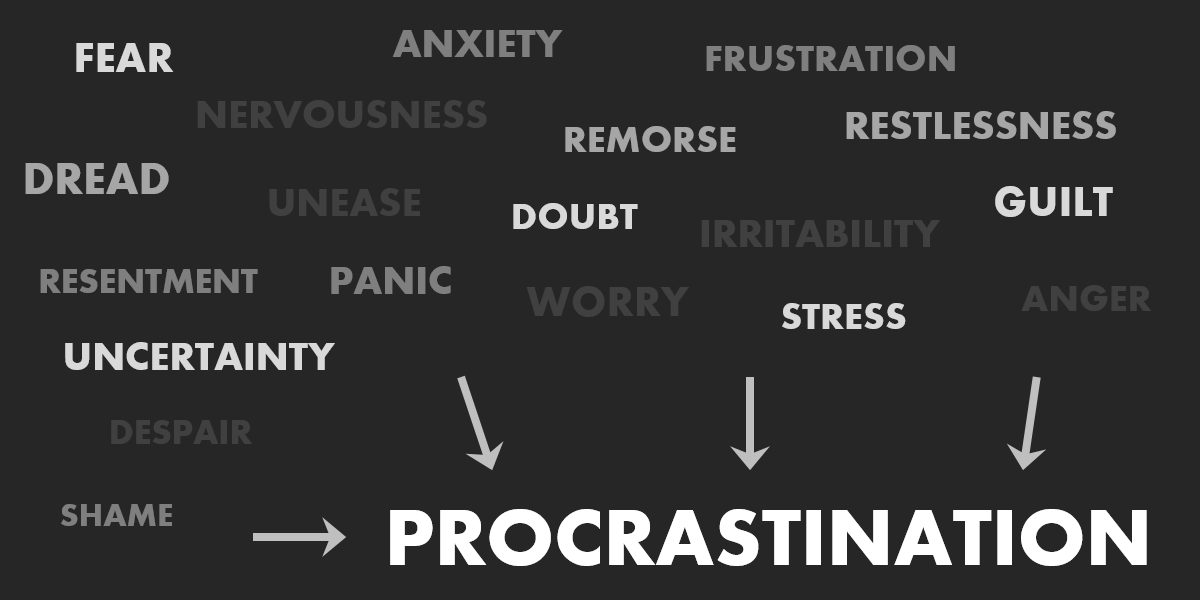 A study that was recently published in Anxiety, Stress & Coping sheds light on the connection between negative emotions and procrastination, which can help those who suffer from procrastination understand and overcome it.

In the study, the researchers examined 53 undergraduate students at a public US college. Over the course of two weeks, participants completed two main daily surveys.

The first survey measured their daily affect, using the Positive and Negative Affect Schedule (PANAS), which measures the following:

The second survey, which was adapted from Lay’s Procrastination Inventory, measured participants’ daily procrastination, by checking the degree to which they agreed with statements such as “In preparing for some deadline, I often wasted time by doing other things” and “I generally delayed before starting on work I have to do”.

For example, Sirois and Pychyl (2013) theorized that when individuals are faced with a task that they view as aversive or anxiety-provoking, they experience a failure in emotion regulation. Unable to healthily manage negative emotions, individuals give in to a desire for quick mood repair by engaging in procrastination behavior.

This is consistent with prior findings that college students procrastinate as a result of prioritizing current and immediate emotional needs over meeting long term goals (Tice & Bratslavsky, 2000). Tice et al. (2001) theorized that NA interferes with motivation and drive to complete tasks. In other words, when upset, people are less likely to prioritize activities that would help them achieve long term goals.

However, as the researchers later point out, it’s important to note that the study does have some substantial limitations, including, most notably, its small, non-random sample. Furthermore, the study leaves open some relevant questions, such as how do negative emotions influence procrastination on a more immediate scale than was measured here.

Nevertheless, the study does provide valuable evidence regarding the nature of the relationship between negative emotions and procrastination, which is in line with prior research on the topic. This evidence can be used not only to help people understand their procrastination better, but to also help them overcome it. As the researchers state:

“…The current findings suggest a need for interventions that focus on emotion regulation strategies that help to reduce [negative affect].”

The researchers then go on to discuss several such strategies, such as helping people foster acceptance and tolerance of negative emotions. There are many anti-procrastination techniques that you can use to achieve this, such as engaging in mindfulness-based practices, engaging in inquiry-based stress-reduction, or trying to find something positive or worthwhile about important tasks that you find aversive.

In addition, being able to predict situations where you’re more likely to engage in procrastination, as a result of expected negative emotions, can help you figure out when and where you should implement the aforementioned anti-procrastination techniques, and can help you set some of them up in advance.